According to Skin Deep by Ted Grossbart, there is a connection between the skin and the mind. The relationship between the skin and the mind is something that most people take for granted or do not consider at all. Many people blush when they are embarrassed or sweat when they are nervous, but these are just small examples of the powerful connection between the two organs. For those suffering from skin disorders, such as vitiligo the relationship between the body and the mind can be especially important. This is because many times, patients with vitiligo also have underlying emotional problems that can affect their symptoms and the success of treatments for vitiligo. These psychological factors must be addressed along with the physical symptoms in order to truly see benefits from medicinal treatments. While physical conditions are still physical first and foremost, and must be treated as such, combining doctor-prescribed treatment with psychological treatments, including therapy, for example, may make the medical approach more effective.

There are three main types of mind-skin connections that can affect those who suffer from skin disorders. The first is psychophysiological, which means that the skin disorder is physiological, but symptoms can be brought on or made worse by psychological factors, such as stress. Another type is primary psychiatric, which means that the skin condition is a symptom of psychiatric disorder. An example of this kind of disorder is body dysmorphic disorder, in which patients see flaws in their body that are not really there or exaggerate minor flaws. The third type of connection is secondary psychiatric, which means that a physiological skin disorder causes a patient to have emotional problems because the symptoms are so disrupting to their lifestyles or cause major cosmetic problems. Vitiligo is one disease that falls into this category. Patients suffering from this physiological disorder may also experience psychological problems including anxiety or depression as a result of their symptoms. Because stress and anxiety can also weaken the body’s immune system, which may play a role in the development of vitiligo, the disorder can also become psychophysiological at times, with symptoms being brought on by the stress. This cycle can be hard to break with only traditional treatments for vitiligo.

Once you recognize the strong connection between the mind and the body, the next step is to use that relationship in order to find ways to treat your symptoms while also improving your state of well-being. This can be done by treating psychological factors as well as physical ones. For example, those with depression need to address this condition by taking anti-depressant medication or attending therapy rather than only relying on treatment of their physical symptoms to improve their mental condition as well. There are also relaxation techniques and self-treatments that can help to reduce stress and anxiety and improve mental well-being, which in turn can help improve one’s immune system and physical well-being. These techniques include hypnosis, which can be done clinically or by yourself, relaxation and/or meditation, and psychotherapy. By treating the psychological side of the disorder, whether it is a cause or an effect, patients will have a better chance of successfully treating the physical skin disorder including vitiligo itself. Once emotional barriers are broken and underlying issues are addressed, real progress for improving your skin condition can begin. To fully explore the mind body skin connection, we recommend Skin Deep by Ted Grossbart. 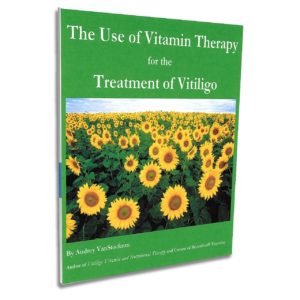